Extremely cold water trickles out of the Glen Canyon Dam into what's left of Glen Canyon, forming an unnatural stretch of trout water on the Arizona/Utah border in a scene from DAMNATION. Photo: Ben Knight

DamNation in the Santa Barbara Independent 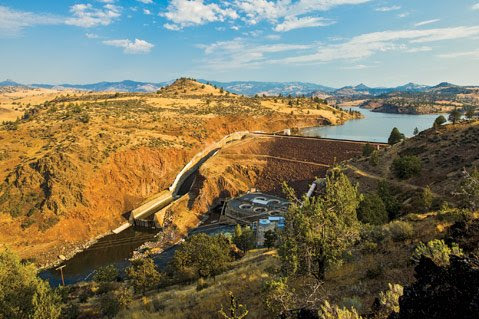 There are good movies, there are bad movies, and then there are movies that matter. DamNation is a movie that matters. An eco-activist documentary with a refreshingly aggressive and law-breaking bend, this new film — made possible thanks in large part to the folks from Patagonia — introduces viewers to one of the most overlooked evildoers in the modern world’s assault on Mother Nature: dams. There’s no doubt that dams have served many important roles over the years, from preventing floods and providing power to storing drinking water and making urban growth possible in remote places. But this “progress” has also come at a very steep price. With a blend of history, face-melting nature cinematography, and a dash of Edward Abbey–style criminal mischief, DamNation lays bare this truth in a way that is educational, entertaining, and, perhaps most importantly, inspirational. 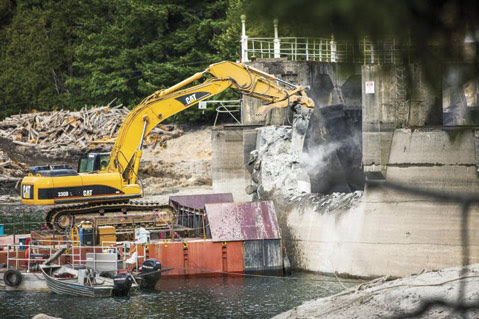 WATER WORLD: A barge-mounted excavator hammers away at Glines Canyon Dam in a scene from DamNation.

It is impossible to separate the story of dams from the story of America in the 20th century. Building river-arresting structures, be they public or private projects, was a critical part of our nation’s rebound from the Great Depression, as well as our domestic World War II–motivated manufacturing efforts and, in the years after, our need to meet ever-expanding energy needs. In fact, some 75,000 dams at least three feet tall exist in the U.S.today, more than 30,000 of which were built between 1950 and 1970. And, while these structures were certainly erected with the greater good in mind, they all share one inconvenient truth: They drastically change the way a river behaves. When you consider the fact that rivers are the proverbial lifeblood of our planet and that various critters call it home, this defining characteristic becomes a potentially insidious and deadly bottom line for fisheries, watersheds, ecosystems, and native ways of life.

“A damn is to a river what a coal-fired power plant is to air quality,” explains Matt Stoecker, a restoration biologist based here on the South Coast who, along with Patagonia’s patriarch Yvonne Chouinard, produced the film. A graduate of UCSB, Stoecker, who has been in the trenches of creek and steelhead-trout habitat restoration here in Santa Barbara County for the past decade and a half, came up with the idea for DamNation while attending an environmental film festival in Nevada City with Chouinard back in 2011. Both blissfully addicted fly-fishing nuts with track records of big-picture conservation/restoration efforts, the duo recognized the powerful storytelling opportunity that was setting up that year, thanks to the planned removal that year of two very large dams in the Pacific Northwest: the Glines Canyon Dam of the Elwha River and the Condit Damn on the White Salmon River. If they acted fast, not only could they record these historic restoration-motivated destruction efforts, but they could also document the radically rapid rebound that occurs in nature when a long-stifled river is set free. 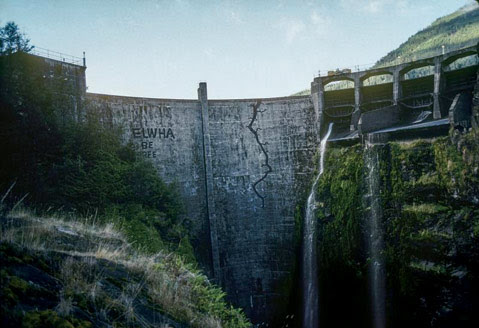 Filmmakers Travis Rummel and Ben Knight, the latter also providing the movie’s narration, were enlisted, and the adventure began. Anything but predictable, DamNation is an ambitious and wide-ranging film that explores the evolution of our nation’s relationship to dams and the impacts this relationship has on our natural world. Incredibly charismatic and colorful characters from the fight to protect rivers, like Mikal Jakubal and Kate Lee (the former being the dam rappelling graffiti artist responsible for giant protest murals on some of the West’s most well-known dams in the 1990s), share the screen with hydropower supporters and sweeping nature shots of rivers, rushing waters, spawning salmon, exploding dams, and landscapes both wild and conquered. The end result is a well-balanced and visually arresting call to arms that has been taking the film festival circuit by storm since premiering in March at the SXSW Film Festival and winning the coveted Audience Choice Award. As Knight puts it in the film’s opening minutes, “Knowing what I know now, it is impossible for me to look at dams the same way ever again.”